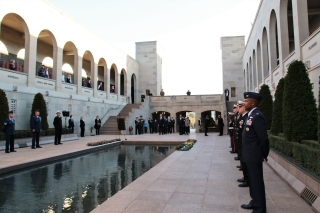 View of the Ceremony
On the 2nd of September 2020, Ambassador and Madam Takahashi participated in a commemorative service held at the Australian War Memorial marking the 75th anniversary of the end of the Second World War.  The ceremony was attended by distinguished guests including His Excellency General the Honourable David Hurley AC DSC (Retd), Governor General of Australia and Her Excellency Mrs Hurley, the Ambassador of the United States of America, and representatives from the British High Commission.  Guests offered their condolences in memory of those who perished during the War, along with prayers for peace.