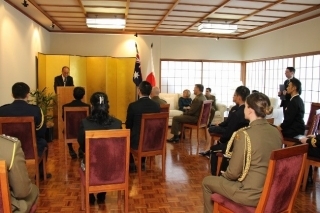 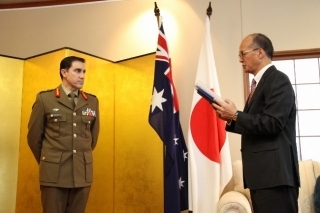 Presentation of the Award
On the 1st of July, Ambassador Takahashi presented the General Yamazaki Chief of Staff Commendation Award to Major General Simon Stuart of the Australian Army. This award was presented in recognition of the support Major General Stuart, as the former commander of the Multinational Force and Observers (MFO) responsible for monitoring the ceasefire between Egypt and Israel in the Sinai Peninsula, provided to Japan Self-Defense Forces members dispatched to MFO headquarters.   The presentation ceremony was attended by Lieutenant General Greg Bilton, Chief of Joint Operations, Lieutenant General John Frewen, Commander of the COVID-19 Taskforce, along with Mrs Stuart and guests from the Australian Department of Defence and the Australian Defence Force, among others.

Ambassador Takahashi, in expressing gratitude to Major General Stuart for his contribution to the dispatch of staff to the MFO headquarters, also highlighted the fact that the activities of the MFO have added value to Japan’s own contributions to the peace and stability of the Middle East by providing a “foundation for peace and prosperity”. Since 1988, Japan has provided financial assistance to the MFO, and since April 2019 has more actively engaged in personnel exchanges with the headquarters of the MFO.

Lieutenant General Bilton, as a representative of the Australian Defence Force, expressed his gratitude to the Embassy of Japan while commenting on the deepening of relations between Japan and Australia, and offered words of praise for the leadership exhibited by General Yamazaki and the professionalism shown by members of the Japan Self-Defense Force.

In his remarks, Major General Stuart spoke of the importance of multilateral co-operation for peace in the Middle East, and highlighted both the important contribution made by Japan to that process through the activities of the Embassy of Japan to Egypt. He also commented on the earnestness with which the Japanese staff dispatched to MFO headquarters performed their duties. 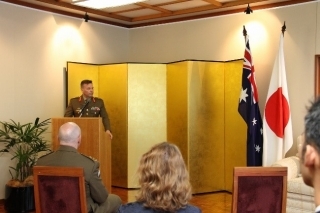 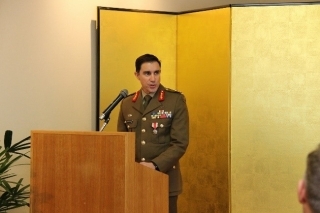