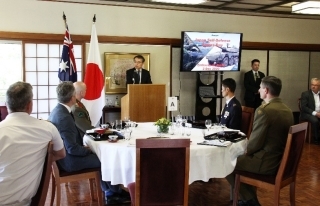 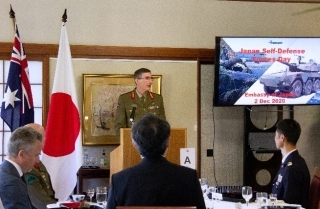 Given concerns about maintaining social distancing amidst the Coronavirus pandemic, this year the scale of the event was reduced in comparison to previous years, with invitations extended primarily to key personnel from Defence.  The luncheon was attended by Chief of the Defence Force General Angus Campbell AO, DSC, and other high ranking officers and senior executive level officials from the Australian Defence Force and Department of Defence.

At the luncheon, following renditions of the Japanese and Australian national anthems, Deputy Chief of Mission Minister Omura made remarks on behalf of Ambassador Takahashi (note: Ambassador Takahashi was undergoing two weeks of mandatory isolation following his return from Japan accompanying Prime Minister Morrison on his visit to Japan in November).  CDF General Campbell then offered his congratulatory remarks as the Guest of Honour.

In making his remarks as representative of the Australian Defence Force, General Campbell offered words of praise for the Japan Self-Defense Forces for its contribution to the defence of Japan and for its support for the international order upon which the peace and security of the region is founded.  General Campbell’s remarks also touched upon his co-operation with his Japanese counterpart, General Yamazaki Kōji, Chief of Joint Staff, and the close ties of friendship and co-operation that the SDF and ADF share in the Indo-Pacific region.

At the luncheon, guests were treated to a Shakuhachi performance by Canberra resident Dr Rupert Summerson, as well as a demonstration of Iaidō, Jodō, and Aikidō by head of the Kuroyama Budōkai Dōjō Mr Damon Schearer and two of his students, thus ensuring a lively commemoration event. 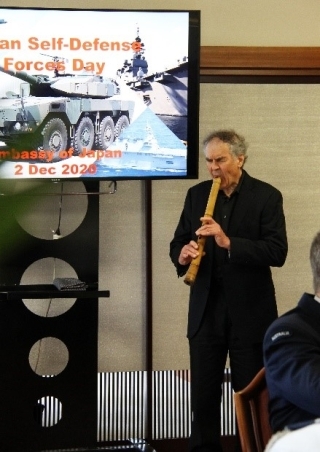 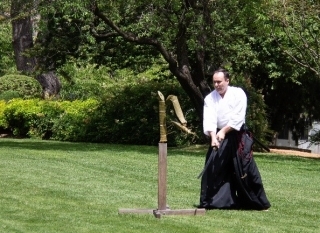